“The first time was at school, and I was actually late on stage! I was messing around with what I was wearing and they kept announcing my name ‘Charlie, please, come to stage. All is ready for you’… And apparently I just walked on and said ‘It’s OK, It’s OK, I am here now!’”.
Charlie Cooper laughs when she tells this story. She was only 10 years old, however, that anecdote still says a lot about how she acts and feels on stage. Of course, it is not that she keeps on making the audience wait for her; it is about the way she approaches music, with a mixture of childlike enthusiasm and the professionalism and maturity which a powerful voice requires.

This soul singer based in Manchester —though she grew up in Stoke-on-Trent— has spent the last year writing, producing, and practicing with her nine-piece band. Her most immediate project is the launch of her EP, and establishing herself as a singer in the first place. “Being creative is not enough”, Charlie says, “there is a whole business behind this and you have to make sure that you do everything you can to get your music heard”.
Even so, with a voice like hers, it appears to be only a matter of time before she is praised for her music across the city and beyond.
Charlie Cooper possesses that kind of warm and persuasive voice, which is both soothing and energetic, and gives you no option but to let yourself get carried away. In part, she owes her talent to her parents and her “lucky genes” — “my dad has a very strong powerful voice, like Frank Sinatra but really more powerful, and my mum has this lovely soft quite deep voice which I think is quite Karen Carpenter”. Nevertheless, the magnetism of her vocals is also reinforced by the band she sings in. Her voice stands out with a big sound in the background. 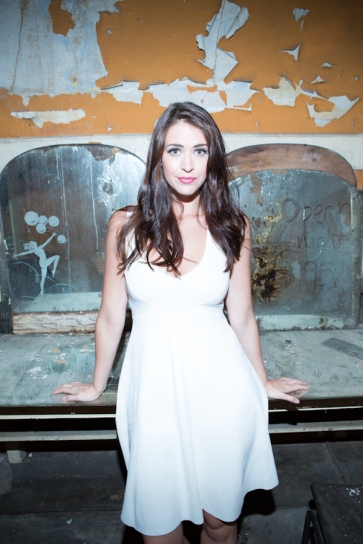 “I have always known that I wanted to do something with singing. Since I could start singing, I was just singing all the time”, Charlie explains. Asked about what she wanted to be when she grew up, she remembers her childhood and some funny stories: “I grew up watching a cartoon that was called Jem and the Holograms. Jem was a singer and I spent all of my time singing the songs of that programme. I remember the neighbour telling me to shut up because I was obviously singing outside in the garden and all that!”
She was 12 when her music teacher asked her to sing a jazz song at another school concert: “This made me stand out quite a lot because I had a really mature voice for my age, and, since then, I started singing in jazz clubs, where my mum would have to take me”.

Eventually, she joined the Staffordshire Youth Jazz Orchestra, but after moving to Manchester to study Philosophy at university, she nearly stopped singing.
Thankfully, a tedious, nine-to-five job at the council brought her back to music: “I was really unhappy, and I was really unhappy because I didn’t want to be doing a desk job! And that’s when I decided I wanted to do something with singing again”.

Now Charlie sings and writes her own songs —“I am starting from scratch, really”. Her lyrics are open to different interpretations. She plays with words and invites listeners to find their own meanings in her songs. The topics she writes about vary too. She does write about love —“I think it is probably really easy to write about love, because everyone experiences love”—, but also about “wild experiences”, she jokes, “contacts I make, as well as conversations, phrases and proverbs I hear”.

Her tracks are as expressive as she is when she speaks. “I definitely want people to connect to something and have empathy with what I am singing about”, Charlie explains with eagerness. “Last time I was at Matt and Phreds and I got people dancing to my songs and that was really really good, and when you make people smile, that’s a very good feeling”.

Matt and Phreds is the first place where she sang when she moved to Manchester. She went out one night, entered the club on one of the clubs regular open Jam nights every Monday, and just got up to sing some jazz. Her voice has grown since then. It has got deeper and more mature. It transmits the confidence of a woman who knows her mind, who is aware of her talent and clear about her goals: “Everybody wants to have a massive voice like Jessie J, like Mariah Carey —you know, just that huge massive-powerful-Cristina Aguilera voice. But I don’t think I try to stretch myself too much to what is not natural to me. I want to improve and get bigger and better but I think staying within a comfortable sound range for you is important”.
She also knows her band has a lot to offer, –“I know we perform extremely well live”–, and in three days she will have the opportunity to show it to the audience. This Friday 14th September Charlie Cooper and her band will be singing 10 catchy tracks from her EP (Beautiful Clown and Something in the water) and also some covers that have influenced her music —from The Supremes, to Stevie Wonder and Etta James.

To know more about Charlie Cooper and listen to some tracks, you can visit her website: http://misscharliecooper.bandpage.com/

Interview published by Matt and Phreds. You can read the original text here.